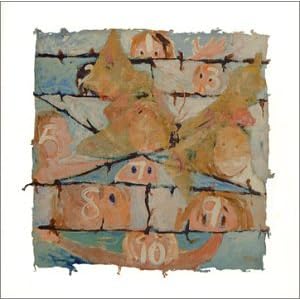 ›
Visit Amazon's Your Works Store
for all the music, discussions, and more.

In 1945, as the Allies swept across Europe and the Third Reich crumbled, the Nazi death camps were liberated one by one. Photographs and news accounts forced the world at last to confront and acknowledge the horror of the genocide that had taken place. At the time, it was widely thought that words would never be found to express such inhumanity, and that the experience of such profound suffering lay beyond human expression. In reality, seminal works about the Holocaust appeared almost immediately: Viktor Frankl’s important psychological treatise, Man’s Search for Meaning, was published in 1946, and If This Is a Man, the first volume of Primo Levi’s autobiographical memoir appeared in 1947, and many more books followed. This resiliency and urgent impulse of artistic response to that monumental 20th-century tragedy proves the human desire to create a narrative, context, and meaning from reality, however gruesomely incomprehensible it may be.

Almost six decades later, new works of history, philosophy and art of all genres are still confronting the Holocaust in the context of a new millennium world that acknowledges genocide as part of our reality. I spoke with composer Ruth Lomon in order to understand her impulse to create this song cycle.

You’ve described the inception of Songs of Remembrance as being inspired by a year’s stay in Jerusalem in 1994 during which you immersed yourself in reading poetry in the Library of the Yad Vashem Holocaust Museum. What has been your history with Israel and did you know in advance what your composition would entail? I’ve lived in Israel 1955–6, 1966, 1987 and 1993–4. My husband, Earle, is a physicist and we go back to Israel for his work and because we love the country and the friends we have there. At the time of our departure for Israel in 1994, the Oslo agreement had been reached and we were filled with renewed hope for peace. Originally, I intended to compose a song cycle on poems of peace by Israeli and Palestinian poets. But with the return of mounting conflict and tensions, this hope eroded and I turned my thoughts to the subject of the Holocaust.

You also studied Persian and Arabic modes (the Maqamet) with its use of quarter tones, as well as the Segah, used in the singing of the Torah. In addition, you have investigated early Christian music, precursors of Gregorian chant and Armenian church music from the third century. Were there features of these exotic and archaic music languages that you found particularly inspiring? How did you incorporate them into your own musical language?

The embellishments or melismas of the melodic line in the settings of “Mes Yeux,” “Gedale’s Song,” “Fear” and “Sunny Evening” are influenced by the modes. Examples of the influence of early Armenian chants are most noticeable in the cadential material I use in “Mes Yeux,” which was the first poem I set to music; it is also a microcosmos of the song cycle because it contains harmonic and melodic references that are the basis of the work.

The cycle opens with an extraordinary setting of the poem by Nellie Sachs in which the phrase “Wir Waisen” (We orphans) becomes a statement of the paradox of the shared solitude of suffering, a central theme in Holocaust literature and in this moving collection of songs. There is the feeling of retelling or reframing what has been said in order to preserve it for the future and counteract this isolation. You met with two of the poets, Berthe Wizenberg Fleischer and Miriam Merzbacher-Blumenthal, who live in New York and Connecticut respectively. How did they react to your project?

I was worried about taking these very personal poems and setting them to music, but when I met with Berthe and Miriam and corresponded with the other poets, they made it clear that they felt it important to have the words sung, spoken, whatever the vehicle, so that we keep this knowledge of the Holocaust alive. Meeting Professor Rosette C. Lamont was also very important. She is

Passionate about music?
Learn more at SoundUnwound, the personal music encyclopedia, or challenge your friends with our music quizzes.

Look for Similar Items by Category

Look for Similar Items by Subject